The fabrication of semiconductor microdevices takes place in cleanrooms to protect the complex circuits from contaminations which can impact operability. The cleanrooms are classified by size of the particles and their amount per cubic foot (cu.ft.) or per cubic meter (ISO standard):

In cleanrooms for the semiconductor industry the air is cleaned with super fine filters which is blown through the ceiling and exhausted through holes in the floor. This laminar flow forwards particles top down. To avoid contaminations from the outside there's always some over pressure inside the cleanroom. Since the production line heatens the air, the air rises and can cause turbulences. To avoid this, the laminar flow can be in reversed direction, from the floor to the ceiling. This is primarily done if the wafers are transported inside of sealed boxes which dock directly to the facility so that there is no possibility for contaminations to reach the wafers. This boxes are called FOUPs (Front Opening Unified Pod).

Since the wafers are completely separated from the ambient air in the cleanroom, there can be another cleanroom class inside the FOUP - a so-called mini environment. For this reason the class inside the boxes can be 1 or 2 to protect the wafers from particles, while the class in the cleanroom itself is only 5, for instance. This is much more efficient since not the entire cleanroom needs to be super clean but only the relatively tiny transport boxes.

Illustration of a class 1 cleanroom 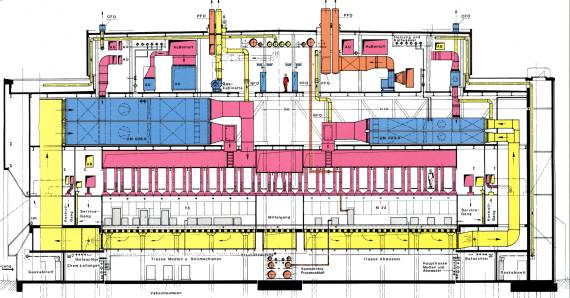 In the illustration above the production line is only the region between the light red colored ventilating system and the yellow colored bottom area. Beneath there is the basement with supply units (pumps, generators etc.), on top there are the air filters. To minimize turbulences the huge cleanroom area often is separated into individual corridors. Many cleanrooms are surrounded by a so-called greyroom (service room) in which the production tools are standing. In this case only the locks to bring in the wafers and the control panels are accessible from inside the cleanroom.

The staff wears special cleanroom suits (often called bunny suits) which do not emit particles. Depending on the requirements the suit covers the complete body including head and face. In addition there are special boots, underclothing and gloves. Next to the entrance there are sometimes air showers to blow everything clear.

Despite the cleanroom there are different types of contamination which are mainly emitted by the staff, the ambient air, by chemicals (gases, dilutions), and by the facility:

Microscopic contaminations are particles which adsorb at the wafer surface. Sources of these contaminations are the ambient air, clothing, abrasion of moving parts, insufficiently filtered liquids (for cleaning, etching, development, ...), or residuals after dry etching.

Microscopic contaminations cause shadowing at the surface, e.g. during lithography. Relativley big particles reduce resolution in contact exposure if they are located between the photomask and the resist layer. In addition they can hold of accelerated ions of the surface during ion implantation or during dry etch.

Particles can also be enclosed by films so that there is uneveness. Subsequent deposited layers can crack at these locations or resist accumulates which causes problems during exposure.

The key source of this contamination is the human who steadily emits salts through skin and breath. But also (alkaline) ions of sodium or potassium from insufficient deionized water can reach the wafers as well as heavy metals of etch dilutions. By radiation in facilities (ion implantation, dry etching) material can be sputtered of walls which deposits on the wafer.

Ionic contaminations for example affect the electric behavior of MOS transistors since their charges change the threshold voltage (the voltage at which the transistor gets conductive). Heavy metals, like iron or copper, provide electrons so that the power consumption of diodes increases. Metals can also act as recombination centers for free charge carriers and on account of this there are not enough free charge carriers for correct mode of operation.

One possibility for wafer cleaning is the ultrasonic bath in which the wafers are placed with a dilution of water, ultrasonic cleansers, and surfactants. Particles are dissoluted from the surface by ultrasonic stimulation, metals and molecular contaminations are partial bound by the cleansers. Not to strong attached particles can also be blown off by nitrogen.

To remove organic contaminations such as grease, oil, or danders, solvents like acetone or ethanol are applicable. However, these can leave carbon residuals.

Ionic contaminations (ions of sodium, potassium etc.) are removed by purging with deionized water. Also the cleaning with rotating brushes and cleansers is possible, but particles will be accumulated at edges and the brushes can damage the surface. Vias or other cavities can be purged with high pressure cleaning (50 bar), however, with this treatment ionic contaminations can not be removed.

Cleaning with water or different cleansers often is not suffiencent, and therefore contaminations have to be removed with aggressive etch dilutions or the surface is milled slightly. Mixtures of hydrogen peroxide and ammonia or Caro's acid (sulfuric acid with hydrogen peroxide) can remove organic contaminations through oxidation at about 90 °C.

A mixture of hydrochloride acid and hydrogen peroxide form alkaline metals into soluble chlorides (salts), heavy metals form complexes and get dissolved. Native oxide can be removed with hydrofluoric acid, in contrast a defined deposited oxide layer can also cover the surface for cetain reasons.

Besides the rinse of the wafers after each individual wet-chemical process, they do pass entire cleaning processes with several different cleaning steps. Thereby the sequence of the cleaning techniques is important, since they can affect each other. A cleaning sequence, for example, could look like this:

Subsequent to every cleaning step the wafers are rinsed with ultrapure water, native oxide is removed in a hydrofluoric acid dip. Depending on the wafer surface the cleaning sequence is different since some cleansers can attack films. At ever smaller structures the cleaning is hindered, not only because of smaller openings which can not be accessed as easily but also because of surface tension and capillary force which can cause collapse of structures.